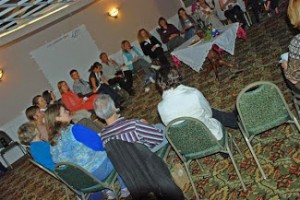 Associate Director, Victim Offender Reconciliation Program Information & Resource Center: 2003-2007. Case management and preparation of victims and offenders for dialog in murder cases. Restorative justice consulting, victim-offender mediation, training and program development at the national and international level. Educated Departments of Corrections about programs being created for families of murder victims to face the killers of their loved ones. Attended National Conferences on Restorative Justice in Texas in 2007 and 2009.

Circlekeeper: I have led Circles in various contexts and have taught basic Circle processes plus conflict resolution skills, deep listening. My work tends to be in using Circles to know each other better and to gain understanding of common values and goals so we can work together. Examples of groups I have been associated with doing Circles include the Florida Bar Elder Law section, classes at Warren Wilson College, and many retreats led in Circle.   2003-present.

Working in a variety of roles, I frequently work with producers in early stages of developing treatments.  I’ve also been involved in some on-going projects. For example:

Introduction to Restorative Justice, Community Conference
Participants:  Most of my RJ trainings are designed to be presented to a mixed group of community members.

Time:  Creating an RJ training is part consulting, part training.  Each program is tailored to the needs of the community.

Content:   Restorative Justice seeks to heal the harm of crime, for all the stakeholders. It is a philosophical perspective as well as a social justice movement.

Restorative Justice brings a community together to approach crime from a restorative perspective. The Community Conference is an organizing meeting of interested members of the community.  Legal professionals, community leaders, social workers, teachers, and others gather to explore the questions:  What is restorative justice?  What can it provide for our community?  Who are the stakeholders?  How does a community align their prosecutors, defense attorneys, judges, social workers, victim advocates, and other stakeholders and create a way to work together?

The Drama Triangle is a common dysfunctional dynamic which is often exacerbated by the intervention of the legal system.   This segment is particularly impactful as we explore what it means to be a victim, how it feels to be a perpetrator, and why we are inclined to want to rescue, even when it perpetuates an already dysfunctional situation. Learning about the dynamic and how to break the cycle assists everyone in the process, even if only one person changes.

A peacemaking circle is an alternative conflict resolution process based on restorative principles that has its origins in ancient tribal conflict resolution rituals.  I am a trained and experience circlekeeper who has led hundreds of circles.  I often teach in circle, allowing and encouraging the active participation of everyone in the room.

The hows and whys of apologies and how to be effective in using an apology to shift impasse in conflict.